This delicious salad is full of colourful vegetable goodness, and features chickpeas- a legume that provides a vegetarian protein alternative to meat, chicken and fish. 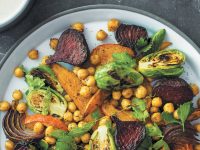